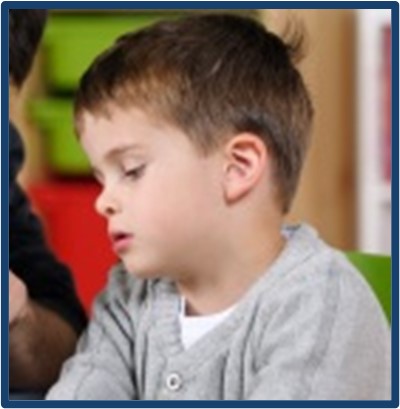 Martim Appleton is a fictitious child to help you to fully understand how the ILD can help you track the progress of all children in your care and record when problems may be unfolding for early intervention.

It demonstrates the new Pupil Timeline | Flag for Focus | Checkpoints | Reflection/Reviews | Interventions | Next Steps which have been developed by your colleagues in childcare.

Please note: These tools have been developed to be used with virtually any curriculum.

Martim has just moved to the area with his family. He is 3 years old, and mum has just had another child. He is quite a shy child and mum wants him to socialise more with children of a similar age and to gain confidence. Martim has a couple of visits to nursery with mum and starts his first full morning session on 1st April. He will be attending 5 morning sessions per week which will be fully funded until he goes into school.

Mum helped nursery staff to complete the All About Me form for Martim during one of his visits and sent in photos to the nursery for them to include in his child profile.

Fig.1 – Completed ‘All About Me’ form

Completion of the ‘All About Me’ form with the parent has helped them discuss any likes and dislikes the child has and allowed them to discuss with the parent any concerns they may have about their child. Mum doesn’t have any concerns about Martim and says he enjoys playing outside and going to the park with the family at weekends. She is keen for him to make some friends as they have recently moved into the area to be closer to family and do not know many people. Mum would like Martim to go to the local school, where he can walk to school and enjoy playing with friends locally. The nursery she has chosen feeds into the local school where most of the children from the nursery will go.

The nursery assigned a keyworker to Martim, who spent time getting to know him and helped settle him into the nursery. She wrote several observations for him within his first week and they encouraged Mum to Self-Register for the ILD Parent Portal and ILD Parent 2 app so she could keep up to date with his daily activities and post observations from home. 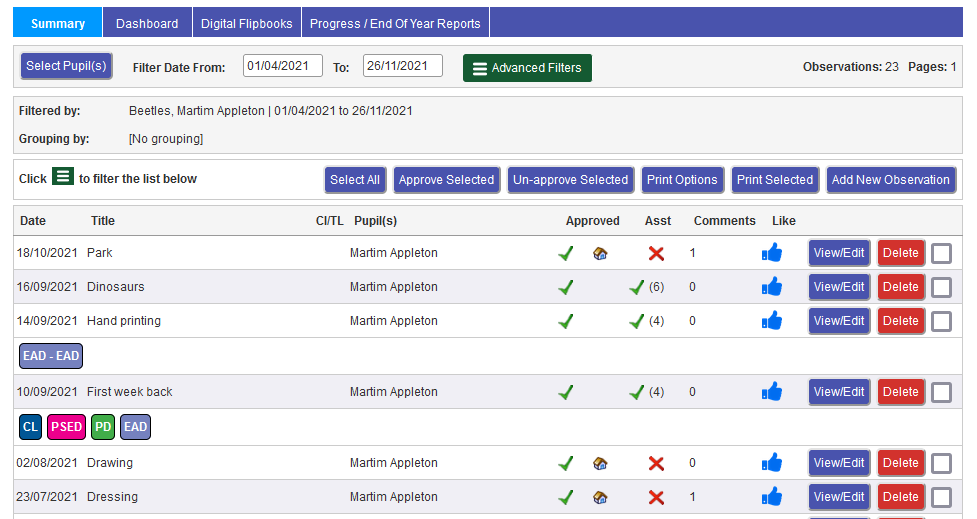 The keyworker also included two reflections for Martim in his first month after reviewing the observations for him. Writing the reflections allowed her to understand more about Martim and helped her to recognise his strengths and areas which may require focus and support. These also showed on his Pupil Timeline after the observation, as evidence of the keyworker getting to know Martim.

She also noticed that while observing Martim planting seeds in the garden, he was struggling to pick up individual seeds from the pot with his thumb and forefinger. He could easily pick up handfuls of seeds, so she helped him to place single seeds in the pot. He was also starting to make some new friends.

While reviewing the observation on the Observation Manager the keyworker wrote a reflection, which helped her to consider what she had observed and how she could help Martim develop further.

After a discussion with the room leader, they decided to concentrate on improving his fine motor skills. She included the Next Step for Martim to help him to develop his pincer grip. This also showed on his Pupil Timeline for reference. As the nursery has chosen to include the next steps in the data which can be viewed by parents, these can be seen on the Parent Portal, so Martim’s parents know what that the nursery will be concentrating on. This allows them to focus on this at home too with Martim if they wish to do so.

After his first month in the nursery, his keyworker and the room leader wrote a Checkpoint for Martim on his Pupil Timeline using the knowledge they had gained through observing and working with him for the month. This will be a baseline for Martim and will also help them think more deeply about how Martim is developing and his strengths. They are using the EYFS Reform curriculum in the nursery and chose to write his first checkpoint by viewing the outcomes for the Development Matters. Being able to view the outcomes for his age band also helped them to think about each statement and whether Martim was on track for his age under each area.

Fig. 7 – Martim’s first Checkpoint shown on his Pupil Timeline. It has been published, making it available on the Parent Portal

The Checkpoint was made available on the Parent Portal (see the screenshot below) for Mum to comment on. By clicking on the print icon, she can view the comments written by the nursery. 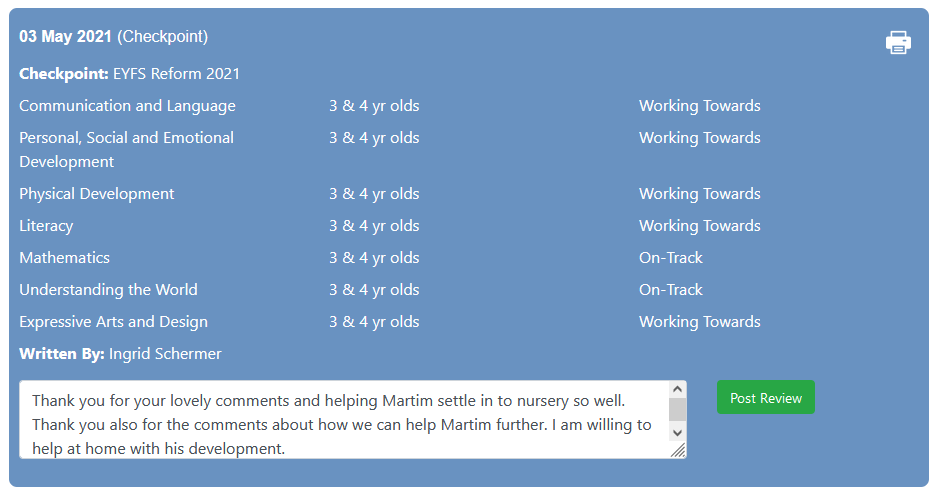 Fig. 8 – The Checkpoint shows on the Parent Portal – Pupil Timeline as it has been published and allows parents/carers to comment

A screenshot of the full Checkpoint report can be seen below: 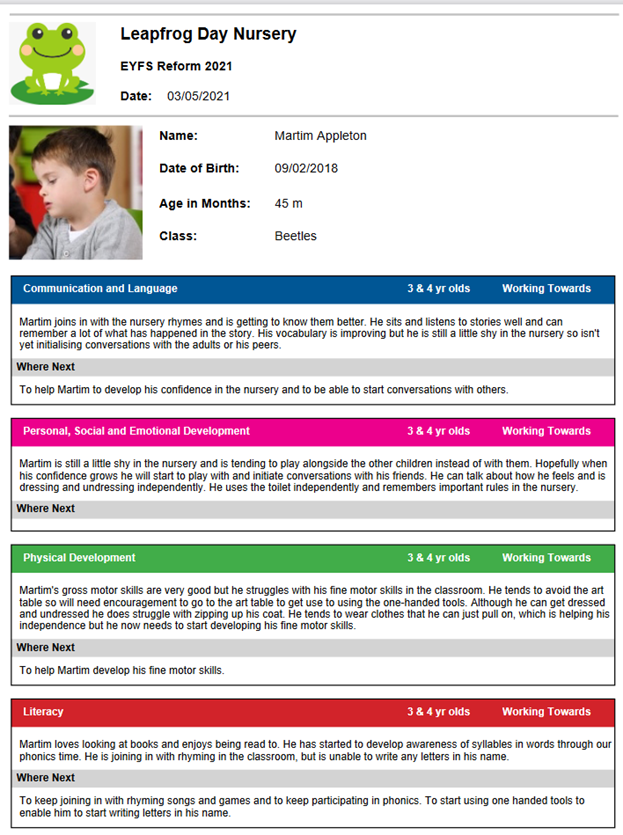 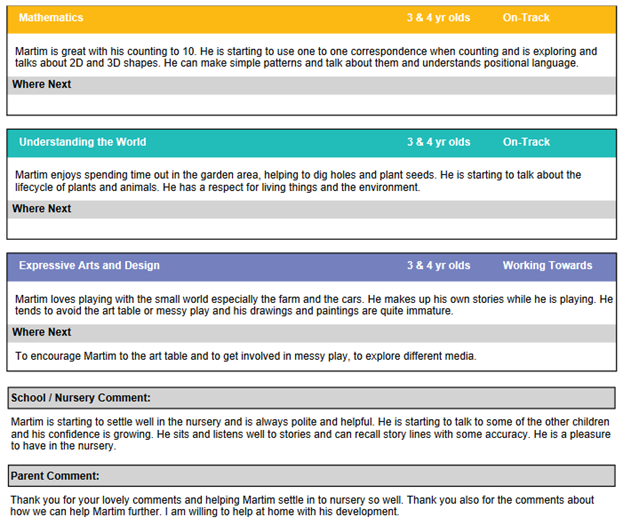 Fig. 9 – A full copy of Martim’s first Checkpoint report available within the ILD and on the Parent Portal

This was great evidence that Mum had seen the checkpoint and communicated that she was happy to help Martim with his development at home. After another observation of Martim going to the art table and joining in with painting, Mum posted a comment asking if there was anything she could do at home to help Martim develop further.

Fig. 10 – The Pupil Timeline showing the observation and parent comment

The nursery commented back to the parent with suggestions of how the parent could help Martim develop his art skills and confidence further at home.

Fig. 11 – The comment showing further evidence of parental engagement on the Pupil Timeline

The nursery continued to observe Martim over the coming weeks along with other children in the nursery. After writing checkpoints for a few children in the nursery, they then decided to run an intervention in the classroom to help children with their fine motor skills as a few of them had recently been highlighted as requiring extra support. Martim was added to the list flagged as requiring extra focus in this area of the curriculum. This flag was shown on the Pupil Timeline for other practitioners and the parent to see.

Fig. 12 – This section of the Pupil Timeline highlights when the Focus Flag has been added (in bright pink) and details of the intervention

The nursery were then able to run a Focus Requirements report, which highlighted the children requiring focus and clearly showed the interventions they were assigned to. 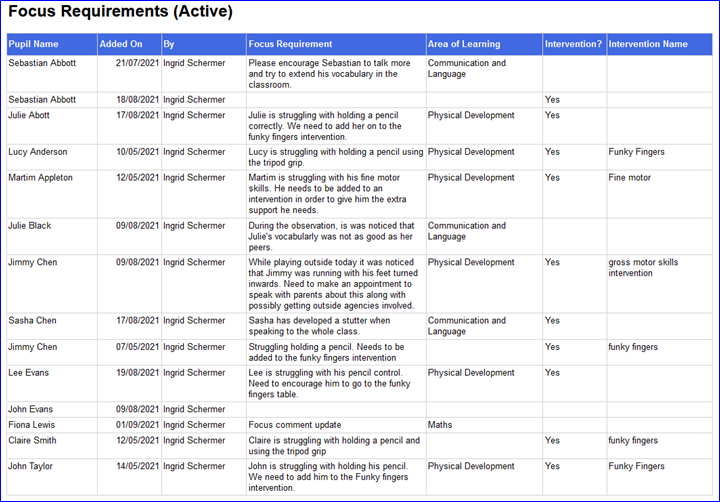 Fig. 13 – The Focus Requirements report showing all the children currently on focus along with any interventions.

The observations and reflections that followed were based on Martim’s confidence, making friends and his fine motor skills as these were the areas highlighted in his checkpoint report requiring improvement. These showed the progress being made in the areas of concern. 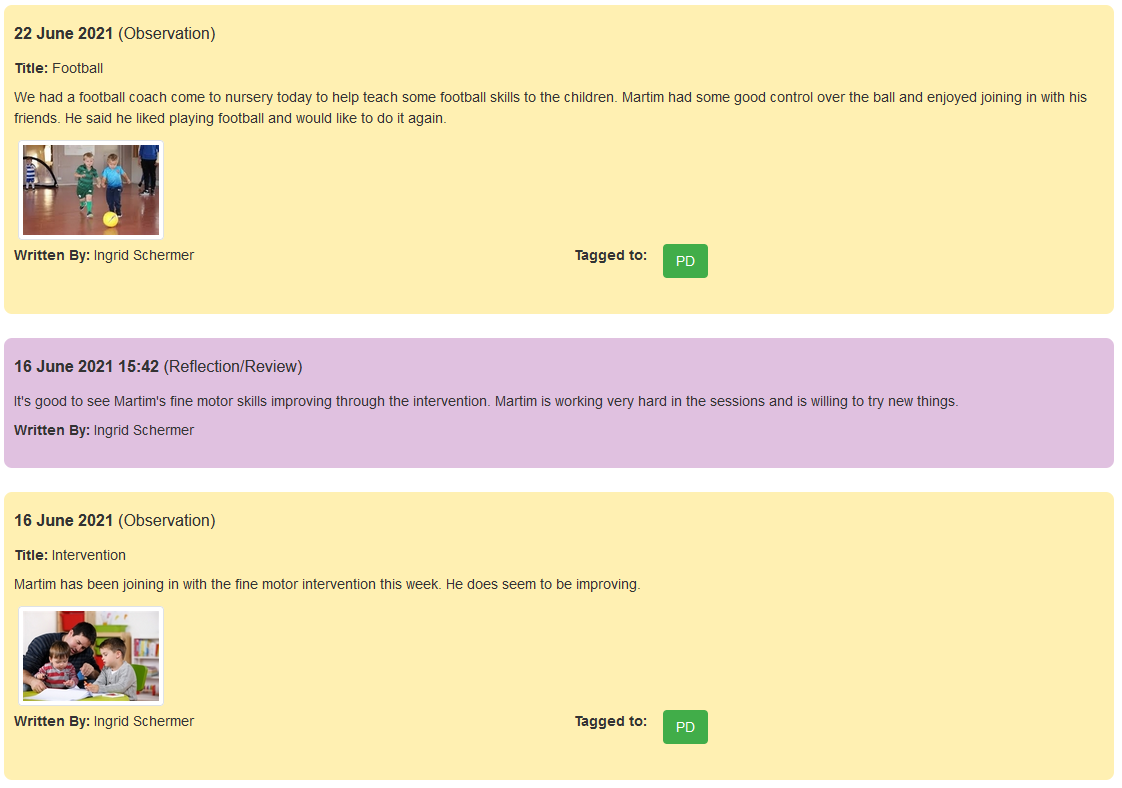 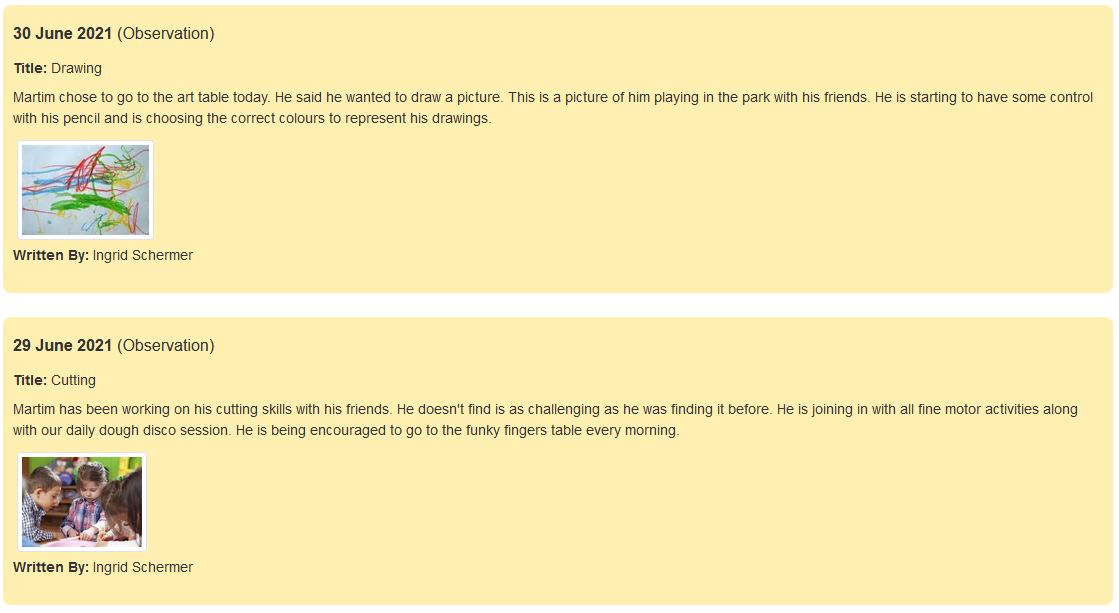 Fig. 14 – Observations and Reflections showing Martim making progress in the areas of concern

When the next Checkpoint was written at the end of term, they found Martim was On-Track in all areas of learning for his current age band.

Fig. 15 – The checkpoint showing Martim had improved in his development

After creating their second checkpoint report, the nursery were able to run the Checkpoint % Analysis Report for Martim which clearly showed the progression he had made between the two checkpoints. 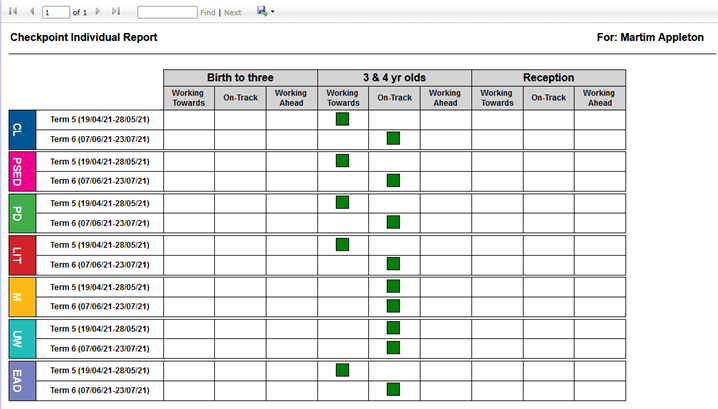 Fig. 16 – The Checkpoint % Analysis report showing the areas of progression for Martim. 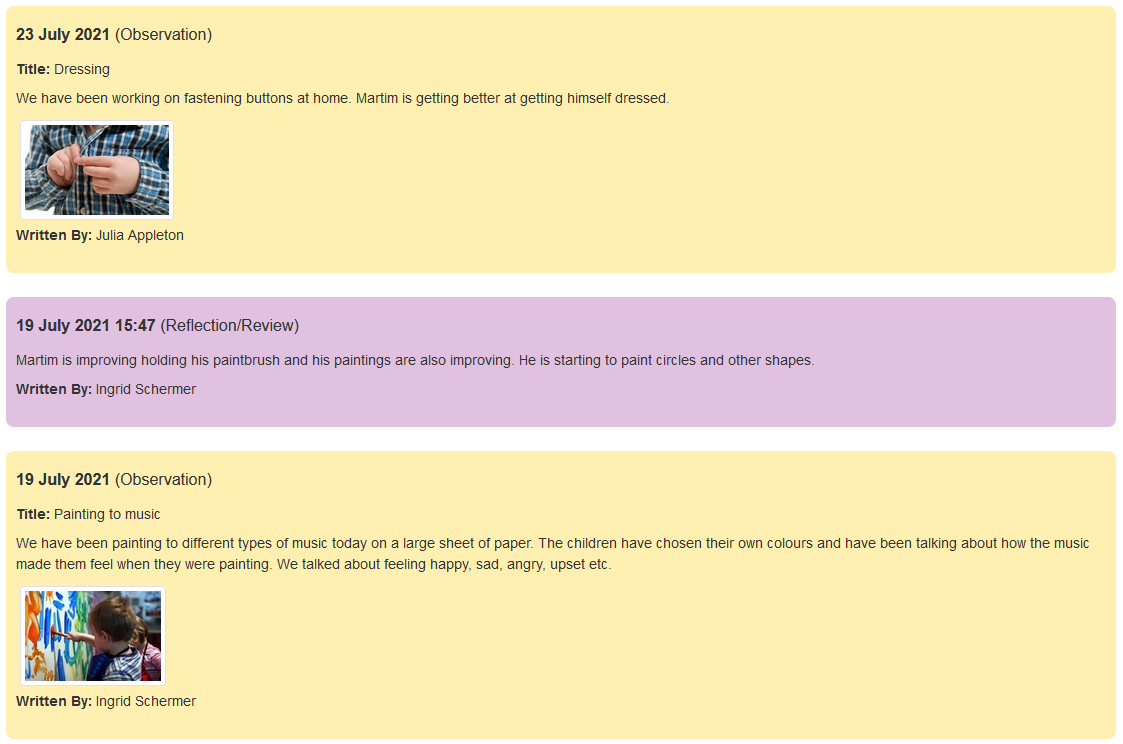 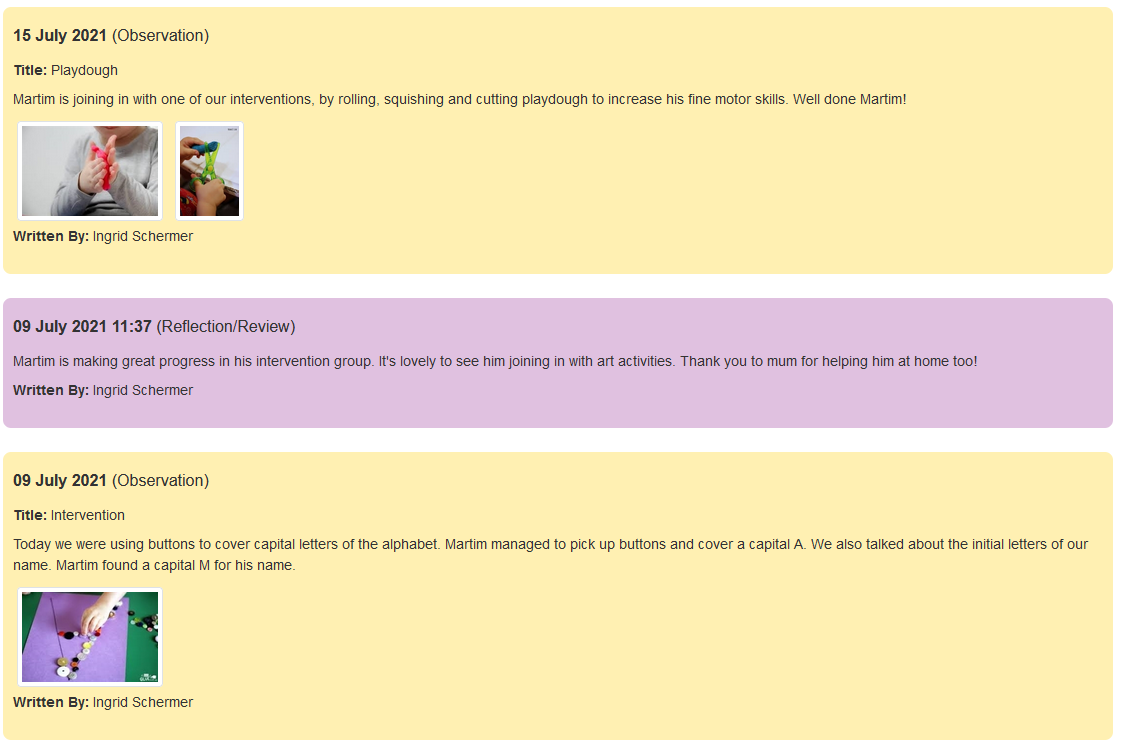 He had completed the intervention group and his fine motor skills were reassessed. The outcome for this was that he would come off focus just before they finished for the summer break. Mum kept working with Martim over the summer and posting observations with comments, which helped him when he returned to class in September, ready for the new academic year.

Fig. 18 – This section of the Pupil Timeline shows an entry where Martim’s Focus was completed, and a comment made against the parent observation (coloured in green)

Fig. 19 – Several observations showing on the Pupil Timeline, showing where Mum had continued to support Martim’s development at home

The scenario detailed above shows how unique the functions are in your ILD system and how they can assist you in your daily practice with supporting the development of every child within your care.

The Pupil Timeline details a complete chronological history of all checkpoints, observations, reflections, next steps, focus and parent comments to assist with parental engagement and progress in all areas of a child’s development.

A quick reference of all key ILD features mentioned in this document: